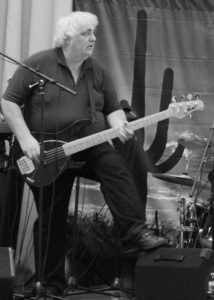 Mike has played guitar and bass in assorted cover, tribute and original bands since university, including a period as Lindsey Buckingham in tribute band Fleetfoot Mike, and two stints on bass with London folk/psych rockers the Divisionists.

All Mike’s instruments are set up by Jon Haire Guitar Services, and Trev Ridney of Tipton Amplification keeps his valve amps in order. As you may have noticed, he’s not a ‘sticker snob’, and is quite happy to play whatever sounds and feels good. Especially after Jon or Trev have had their hands on it!